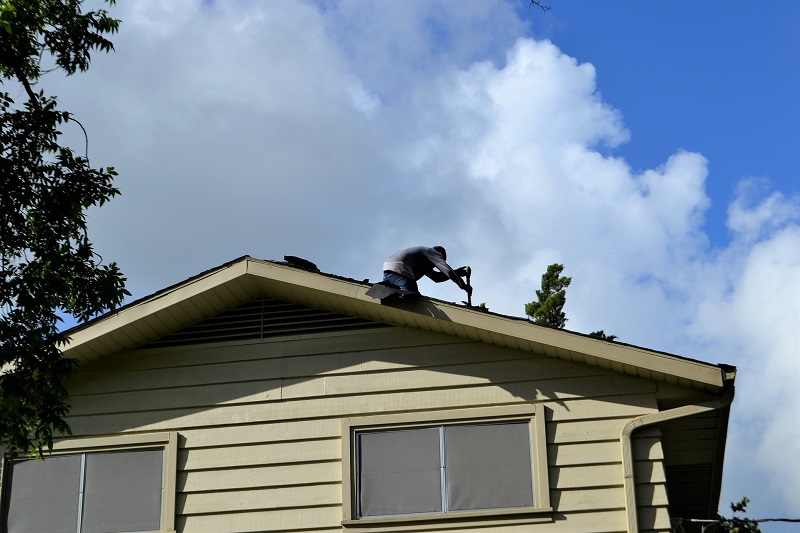 In the aftermath of a hurricane, surrounding areas are thrust into the mode of rebuilding and re-roofing. Hurricanes are distinctly brutal on any roofing material. While slate tile is one of the most durable roofing products, it will sustain damage. Hurricane damage to slate roofing is typically caused by two main factors; wind damage and flying debris. Hail is also a factor in areas where it occurs, but it is not always present with a hurricane.

When hurricane force wind is the main culprit, the age of the slate tile can determine the extent of the damage. New slate tile is very resistant to damage from high winds. However, insurance companies usually do not discriminate against older roofs that are much more susceptible. So it is unlikely an adjuster will try to “depreciate” a slate tile roof in processing a claim. If this does occur, it is important to establish that slate tile roofs have a 100+ year service life so the depreciation should be minimal. New or old, if the damage is caused by high winds, most of it will be in the form of completely missing slate tiles concentrated on the most exposed surfaces of the roof. If the hurricane’s wind were blowing from the east, the eastern exposure will likely be the sole area damaged as opposed to flying debris and hail, the slate tile will typically be broken at the exposure line. This breakage is cause by wind uplift right along the line where the slate tile is overlapped by the course above.

If the damage to individual slate tiles is scattered over a wide area and represents a small percentage of the roof, complete replacement is probably not required. However, it is important for the roofing contractor to closely inspect the unaffected areas for cracking. Just because a piece of slate tile looks intact from the ground, does not mean it is undamaged. When inspecting the roof for hurricane damage due to wind uplift, pay close attention to the slate tiles surrounding the broken pieces. Also inspect the leading edges of the roof along the drip edge and in valleys. If the hip and ridge cap are missing from one particular area, closely inspect the remaining cap to be sure cracks are not evident around the nail holes.

Slate tile roofing is more susceptible to damage due to flying debris caused by hurricanes. Falling limbs, building materials detached from other structures and anything else that becomes airborne in high winds will undoubtedly cause damage if it strikes a slate tile roof. Similarly to wind damage, it can be minor damage scattered about the roof. However, the broken slate tiles will look different in that corners will be broken, broken pieces will be grouped together, and the slate tile will typically not be broken right along the exposure line. Again, if the damage is only to a small area, total replacement may not be required. Related to the repair cost, if an area is more than about 20% damaged it is likely to be more cost effective to replace the entire section of the roof. When getting repair estimates for insurance claims, be sure to ask for a price both ways: Repair or replace. If the cost is close, it is better to fully replace the damaged section. As in wind damage, the affected areas will usually be worst on the side from which the hurricane blew. 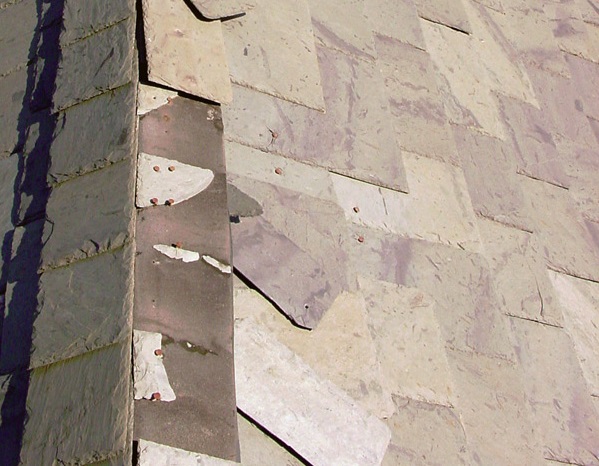 Hail is a different animal, especially combined with hurricane force winds, and the effect on a slate roof can be devastating. While the damage will appear worse on the high wind side, the entire roof will likely sustain serious trauma. The damage usually appears to look like gun shot holes in the slate tile and is directly proportional to the speed of the wind and the size of the hail. Newer slate roofs are less likely to be totally destroyed, but roofs older than 50 years will not likely survive a severe hail storm. Of course the original quality of the slate is also a factor with better slate tiles being more durable. Even if you only see a few actual holes in the slate tile itself, the damage can be widespread in the form of hairline fractures. Even if you see no holes, inspect the flashing, metal valleys, and gutters. If you see numerous dings, the roof is probably damaged. The roof may not leak or appear in bad shape, but it is important to have it inspected closely before closing out any insurance claims. The damage may be too subtle to see at first, and then show itself months or even a few years later in the form of slate tiles breaking for apparently no reason. A good source of information on identifying hail damage can be seen in an online article.

In dealing with insurance claims on slate tile roofing, especially related to hurricane damage, be sure to have more than one qualified slate tile installer inspect the roof. Do not let a roofer or an insurance adjuster convince you that slate tile is more susceptible to damage than standard fiberglass shingles in an effort to save money. The fact is that slate tile is much more durable. However, some roofers know nothing about slate tile and will try to sway the homeowner away because they want the job, but don’t even know how to price a slate tile roof. Plus, you want your house to be worth the same or more after the repairs. Replacing the slate tilewith a lesser material will, without a doubt, affect the overall value of the home. 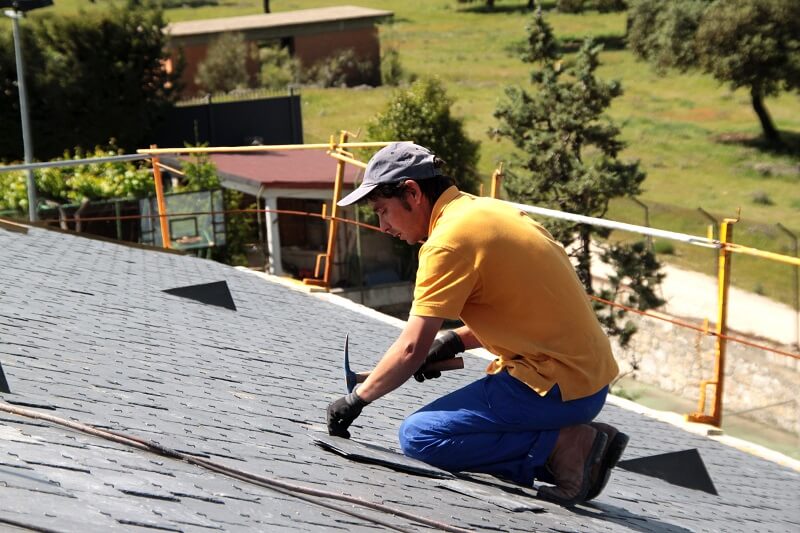 As an example: Houston has a high concentration of new slate tile roofs in prominent areas. In the last 15 years and due to the increased availability of lower cost imported slate tile roofing, there has been a virtual boom in slate tile roofing in Houston, Dallas, and many of the high-end areas along the coast. As a result, there are a number of qualified roofers to install slate tile roofing. However, many of them may not be familiar with damage from hurricanes. Hurricanes in Texas, especially Houston and Galveston, are not new, but the high concentration of slate tile roofing is more recent. A good resource to separate the “qualified slate tile installer” from the “not so qualified shingle roofer” is through slate manufacturers and suppliers like Vermont Slate co. If a roofer can not provide at least three references for actual slate roofing, not imitation slate or tile, then keep looking. The most important factor in getting the roof fixed correctly and being treated fairly by the insurance company is to be only deal with reputable and experienced suppliers and installers.