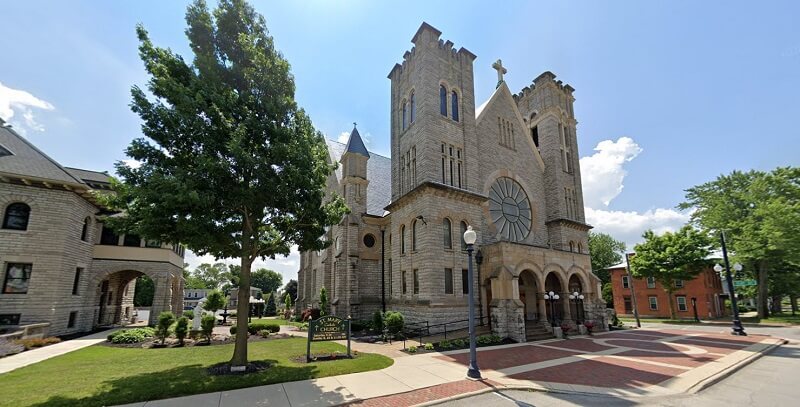 St. Mary’s Parish is the oldest continuous parish in the Diocese of Toledo. It was founded on May 15, 1831, by Irish Immigrants who settled in the Tiffin area (Ohio). In the mid 1800’s, St. Mary’s opened its doors to the influx of German Immigrants. Because of Father Healy’s insight that the church would have a rapidly growing congregation, he decided to construct a new church but was unable to realize his dream due to his untimely death.

At the turn of the century, Italian immigrants found their home at St. Mary’s Catholic church also, and the church re-began construction, with the first cornerstone being laid in 1905. Finally, the church was completed and dedicated on Sunday, September 30, 1906. Since that time, the church has gone through a variety of renovations.

We were proud to help this church get a new slate roof. Pictured is Cupa 98 black 24×12 which was finished January 2015. It was installed by Wolfe’s Roofing in Walbridge, Ohio. We replaced the old Pennsylvania black slate roof which is black in the quarry, but as it ages, fades to a white color. Cupa 98 is a true unfading black slate and we are excited for this church’s new look.