Designed by the collaboration of Boston’s Tappe’ Architects and BCWH Architects of Richmond, Virginia, the new Fairfiled Library in Henrico County (Virginia) provides a center of opportunity and learning for its local community. The design team held several neighborhood stakeholder meetings to generate a solution responding to desires and aspirations of the surrounding population. Core facility spaces were to focus on teaching life skills and family connectedness, ideals the community was delighted to focus upon.

Construction on the two-story, 44,803-square-foot building began on its 10-acre, Fairfield, Virginia site in June of 2018, with an expected completion date to occur in autumn of 2019. This $29 million library project features an extremely modern design that, according to county officials, represents a huge upgrade from the original Fairfield Library, which opened in 1976 and was just 24,000 square feet in size. County officials will seek LEED (Leadership in Energy and Environmental Design) Silver certification status for the library; the LEED program, operated by the U.S. Green Building Council, recognizes facilities that are environmentally friendly.

Henrico County is located in the Humid Subtropical Climate Zone, with hot and humid summers and moderately cold winters. To combat the county’s wideranging climatic extremes, the CUPACLAD® natural slate rainscreen system was specified for the exterior of the library. A venerated building material used since ancient times, natural slate is non-combustible and naturally waterproof. Matt Berk, co-owner of Richmond, Virginia-based EcoSupply Center, the distributor which provided the slate material, stated,

“CUPACLAD®, a European exterior system which may be be relatively new to America, won’t be considered new for long in this country. Obviously, the collaboration of Tappe’ Architects of Boston and BCWH Architects of Richmond, Virginia, had the creative vision to realize this. So, they contacted us.

“The county’s plan,” continued Berk, “originally was to build out the library similar to how other community centers were undergoing changes to become larger and thus, offering more. And the architects were extremely focused on delivering a very modern and highly advanced overall design. This included the building envelope to be clad with a natural slate rainscreen. 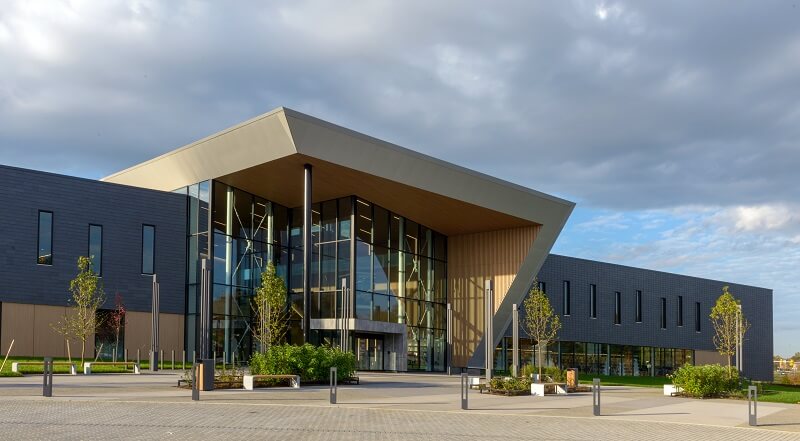 Berk went on to state that a high-performance slate rainscreen system is surprisingly competitive in price (or lower) than other modern systems.

“The architects were very knowledgeable of this, and slate was part of the original design intent right from the beginning. For the library’s exterior facade, they specified 16,000 square feet of the CUPACLAD® Parallel 101 System.

“The project lost over 100 days due to harsh weather conditions, and the county didn’t give the General Contractor any of that time back. They wanted this done on schedule, regardless of the weather!” exclaimed Berk. “Site conditions were challenging due to drainage problems that probably should have been considered early in the process. Additionally, slogging through wet Virginia clay while moving materials and machinery to-and-from the jobsite, presented extreme challenges, as well.

As we all know, when any construction project gets backed up, sequencing and scheduling subcontractors becomes more difficult, and this became very evident.

“So, we had to start the cladding project even before the exterior of the structure was really ready for it,” Berk continued. “This had to take place prior to the windows being installed!”

As it turned out, luckily the CUPACLAD® system was ideal for conditions such as these, so certain areas could be prepped while other areas were yet to be preparation-ready.

“These challenges actually brought suppliers and contractors together,” acknowledged Berk. “A sense of ‘team’ between all involved began to grow. And, technically speaking, it was important to acknowledge that the CUPACLAD® 101 Parallel needs to be installed left to right. There were also VERY long runs and expanses of the slate, so the courses had to land within half an inch up to 50-60’+ away. 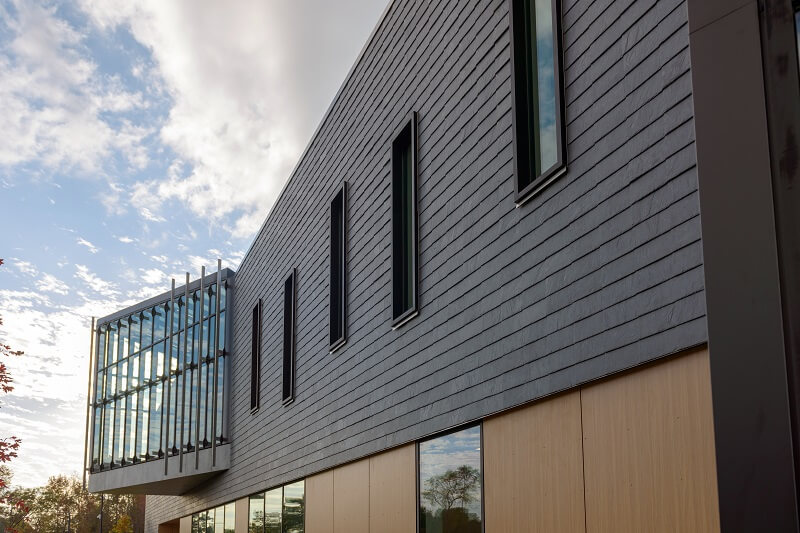 “Additionally,” continued Berk, “flashing is a real consideration when it comes to rainscreens with deep spaces behind them. Therefore, we ultimately used 6” mounting brackets, so the slate ended about 8.125” away from the face of the sheathing. Projecting 8” out from the building often means that flashing will sag if not supported, especially heavy gauge stainless, which isn’t as stiff as aluminum. But all along, the ‘team’ knew everything would work out. And, it did!”

Even with all the challenges the project faced, from start to finish, the entire slate façade was installed in just twelve weeks. The architects were elated with the overall production process, and according to Berk, mentioned “a number of times” that CUPACLAD® slate was everything they were after!”

Ken Rule, CEO of The Vermont Slate Company, which partners with Spain’s Cupa organization, summed up the vast advantages offered by the CUPACLAD® System.

“The materials are 100% sustainable. Unlike artificial products, skilled craftsmen handcraft our natural slate, with no additional surface treatment required. Additionally, our systems are quick and easy to install by any facade contractors. Once installed, the slate is permanently fixed in a safe manner; therefore, no maintenance is ever needed.

“And last,” concluded Rule, “The CUPACLAD® System is very modern. There are so many possibilities offered in designing with natural slate. The systems used are light and versatile… and, can be adapted to virtually any exterior façade.” 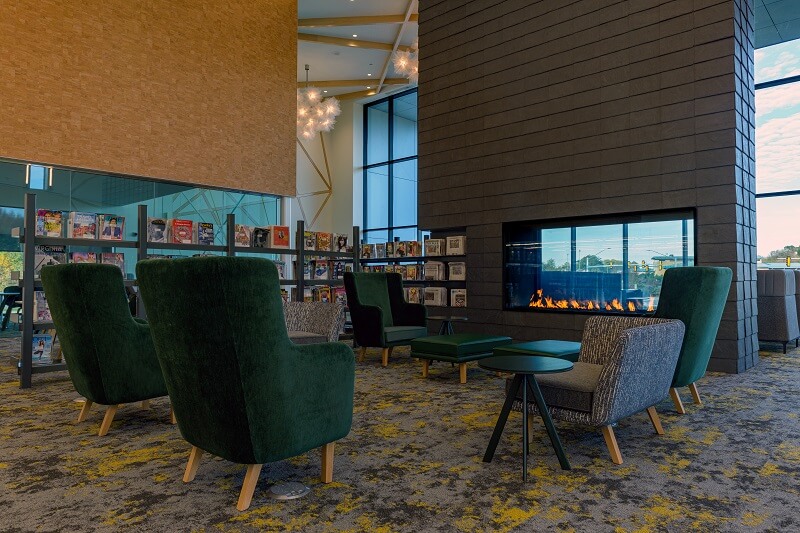 Earlier in this article, you read that the local community was in favor of its residents going to the new library to be taught “life skills and family connectedness.” Doesn’t it make sense… that these two noble subjects can be learned within a haven that will always look inviting… and due to its well-thought-out exterior construction strategies, will protect its visitors from extreme climate change year-round?

It’s true that there are all kinds of substitutes for just about every kind of exterior cladding. But there is no substitute for the look, the quality, the value AND the longevity, which a natural slate rainscreen façade offers. Not one.