The Town of Shelburne, Vermont was chartered on August 18, 1763. It was named for the Earl of Shelburne, a member of British Parliament who had championed the claim of New Hampshire to lands between the Connecticut River and Lake Champlain. In 2013, Shelburne celebrated its 250th anniversary. A location steeped in tradition, it is known for its specific architectural “look,” characterized by many older and very well maintained buildings. 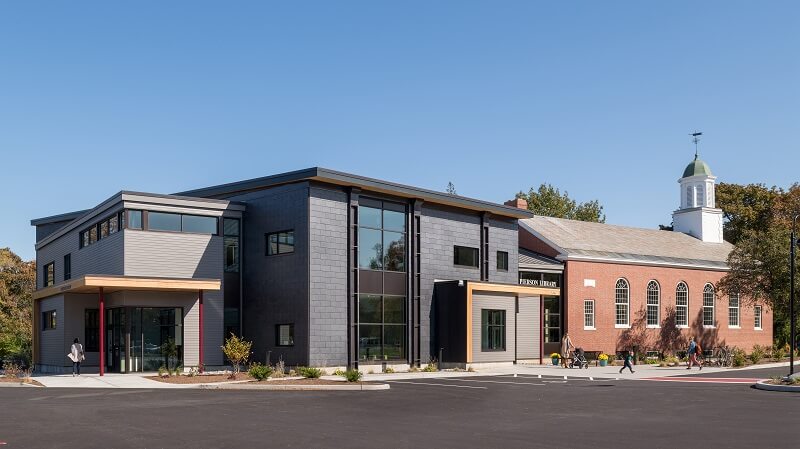 Neagley & Chase Construction Company was awarded the contract to be Construction Manager for this highly researched municipal project, which was slated to connect together the Shelburne Pierson Library, town hall and town center. The firm worked directly with the Town of Shelburne and the selected architectural firm, Vermont Integrated Architecture (VIA) on this inspired project. From the beginning the work plan included replacing the existing library with a beautiful new facility, adjacent and connected to the renovated historic town hall.

The overall architectural strategy was to build a brand new, 21st century library, while conserving Shelburne Town Hall’s “look” and in doing so, strengthening the center of Shelburne Village. In particular, this new facility not only was created to visually blend in with the existing area from an architectural standpoint… but, to address energy efficiency issues while achieving a net-zero ready standard and maximizing flexibility and future community use. 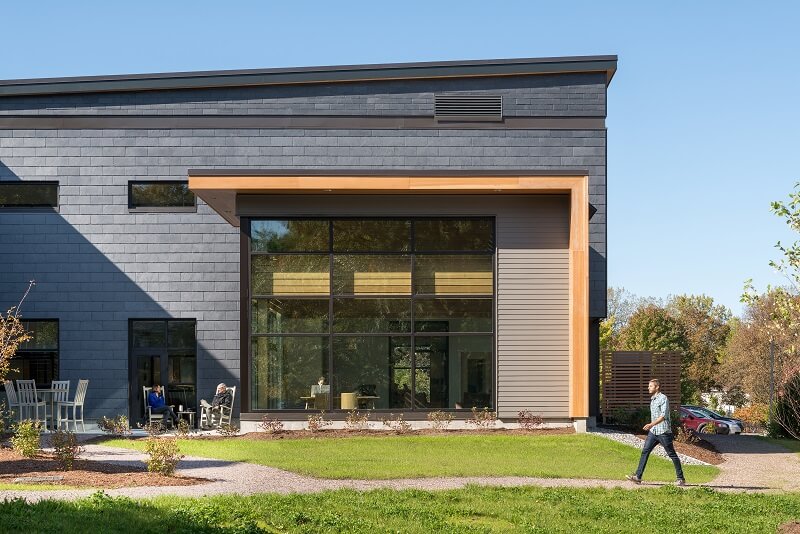 Vermont Integrated Architecture began working with the Pierson Library Steering Committee and the Town of Shelburne by designing various options for the new library. Planned to be a highly modern facility tackling both present and future needs of the Town of Shelburne, there were a number of challenges to address. For example, 21st century libraries must cater to a wide variety of constituents, provide spaces for the growing use of technology, and be flexible enough to accommodate future uses not yet imagined. VIA’s vision for the new library created an accessible and relevant community center for the residents of Shelburne. At the start of the project, VIA built a model of the proposed library center to offer a more tangible perspective on the project prior to the bond vote, which was quickly passed.

“We first learned about the CUPACLAD System at the Northeast Sustainable Energy Association conference a few years ago. At that time, we were not looking for a product to be used to clad the exterior of Shelburne’s. But after seeing it and learning about all it offered, both city officials and all of us at VIA simply fell in love with the product.

“In particular, we liked the fact that it needed little or no maintenance… and, offered long term durability. We knew it would be challenging for a municipal client to raise funds to include a product like this, which at first go around was not specified. But after considering the aesthetics of the product, and that it consisted 100% of a natural material, everyone agreed upon it,” Nedzinski continued. 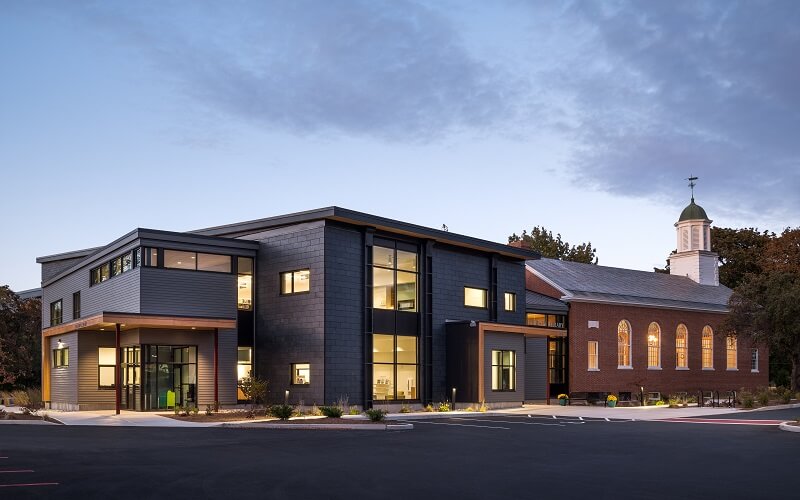 “One major challenge was because the walls of the library were tall, we were apprehensive about load bearing factors. And because the building was designed with a Net Zero energy, exterior envelope of 4” thick insulation, the weight of the façade was a concern,” Nedzinski continued. “The installation process was researched, and ultimately by crossing layers of z-girts, the CUPACLAD system was successfully adhered to the building’s exterior.”

This installation included using the natural slate as a rainscreen cladding concept—a kind of double-wall construction that utilizes a surface to help keep the rain out and an inner layer to offer thermal insulation, prevent excessive air leakage and carry wind loading. The slate actually breathes just like a skin, as the inner layer reduces energy losses. 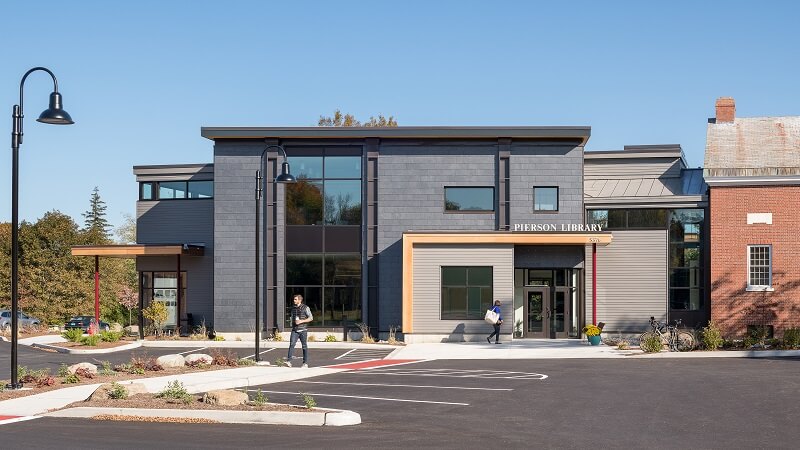 Neagley & Chase contacted Boule & Sons contracting to work on the project. According to partner Jacob Boules,

“No one in our area had ever previously worked with the CUPACLAD System. However, we became excited about the product after learning about it; clearly we were up for the challenge. We are always up to try new products and methods that are innovative in our industry. We quickly found out that the system was easy to work with once we got started.

“CUPACLAD customer support was great,” added Boule. “We were supplied with easy, drawn out directions. Like everything new, there is always a learning curve, but ultimately, our guys in the field had no problems with the system at all. We look forward to working with the system again!” 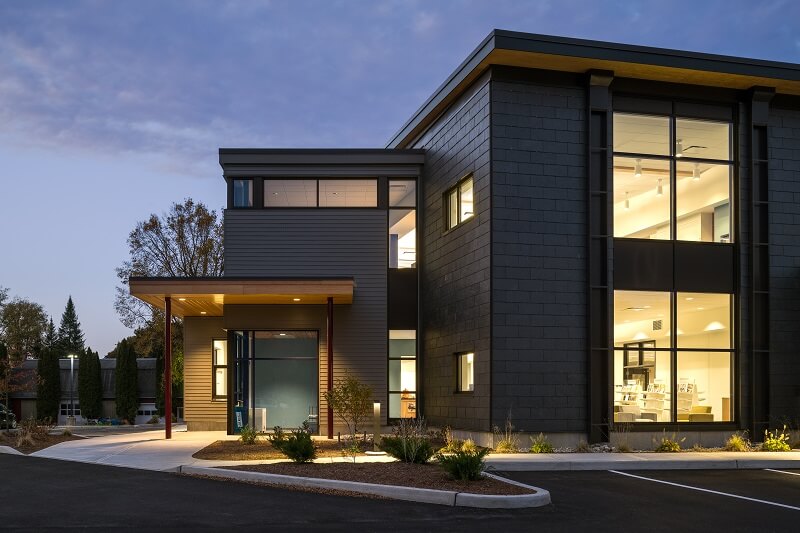 “The greatest return from this job,” beamed Nedzinski, “was that everyone seems to love the final results. It has given a special sense of pride to the community. And, we just learned that the Pierson Library has extended its hours due to its overwhelming popularity!”