The new College of Engineering, Technology and Aeronautics (CETA) at Southern New Hampshire University is ready to weather the storm(s) of that region of this country. Projected to be completed before the end of 2019, it is anticipated the building will be available to both students and the general public for total usage at that time, as well. 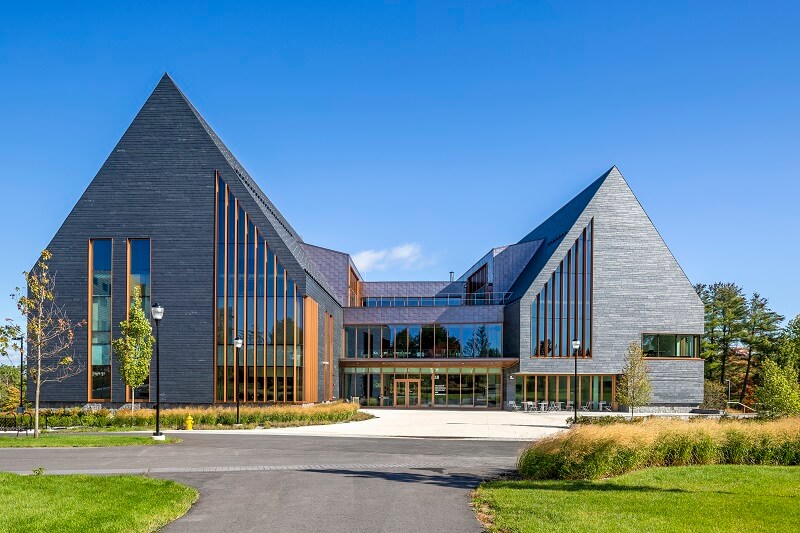 According to university officials, “Right after crews finished the site utilities, workers started on the foundation work.” A major significance of this new CETA building… is that it will have been built with the intention of having classes taught there full-time. (The current CETA building was built only to serve as a temporary engineering building, until construction of the new CETA building was completed later on this year.) Generally speaking, in Southern New Hampshire, the summers are warm, the winters are freezing, and it is partly cloudy year round. Over the course of the year, the temperature typically varies from 16°F to 83°F and is rarely below 1°F or above 91°F. However in the last two years, temperature has spiked up to 106°F… and, greater amounts of both rain and snow than in the past are not out of the question.

Boston-based Wilson HGA, a nationaldesign and architecture company specializing in science and technology facilities for higher education, was selected to design the building by Skanska, the global project development and construction group. Christianne Peschard, Project Manager of the firm stated,

“The overall design pays homage to the surrounding New Hampshire architecture. We wanted a ‘vernacular look,’ so we looked at old covered bridges to get inspiration for the building’s roofing. Additionally, we wanted to follow the visual language of the SNHU community buildings, especially their pitched roofs, already in place. The look of slate was something we really liked, so we started out by looking for it via online searching.” 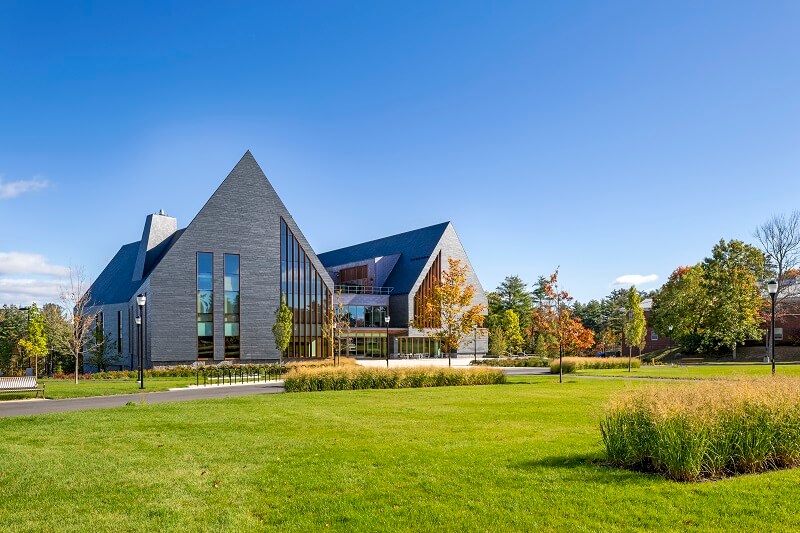 One of the principals of Wilson HGA recommended that both the roofing and the siding have matching slate… a very monochromatic European look. Peschard stated that her firm was contracted by Skanska, officials from which had already spoken with some of the building’s subcontractors, including T.J. McCartney, Inc., the firm which eventually installed the slate product to the structure’s exterior. Small mockups were done to ensure all the details would work out… especially for the corners of the building’s façade. Once approved, a second mockup was created specifically for water testing. It was immediately approved.

Because of the range of climatic change in that region, it was a wise decision for the architectural firm to specify an exterior façade rainscreen system that would protect the building both in the hottest of summers to the coldest of winters. The architects opted for the CUPACLAD® System, which is made from the most time-tested, weather-resistant pure stone material known to mankind: natural slate.

CUPACLAD® materials are 100% sustainable. Unlike artificial products, skilled craftsmen handcraft natural slate, with no additional surface treatment ever included or required. Additionally, the systems are quick and easy to install by professional facade contractors. Once installed, the slate is permanently attached in a safe manner; therefore, no maintenance is ever needed. 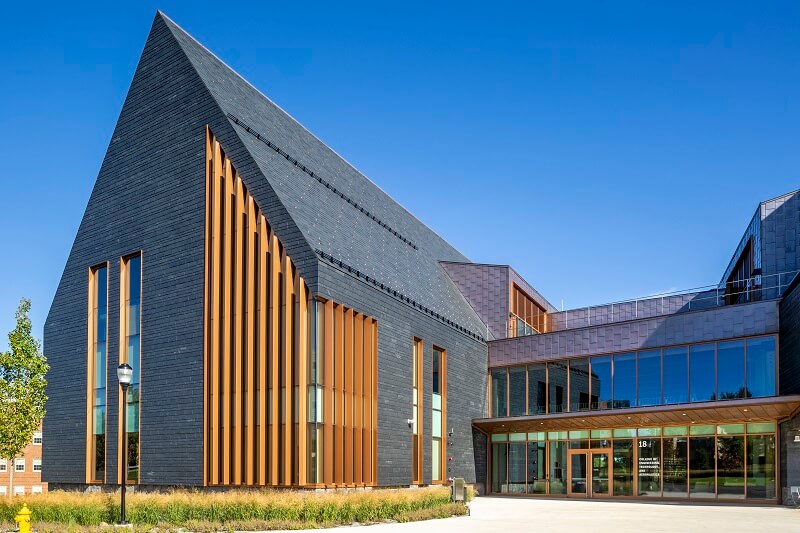 Additionally, the CUPACLAD® System offers a very modern visual “look.” And, there are so many possibilities to consider when designing with natural slate. The systems used are light and versatile… and, can be adapted to virtually any exterior façade.

According to Barry Hamilton, Operations Manager of T.J. McCartney, Inc. the firm which installed the slate rainscreen system at SNHU, “This was our first time working with CupaClad®. We are used to working with very large ‘panels’ when installing siding, so we were anticipating quite a bit of labor and time when mounting these slate materials. But to our surprise, that was not the case at all! The school is ‘slated’ to be open for the second semester at the end of November, so working with this system made it easy to hit our timeline.

“Installation directions and drawings were accurate and perfect. Easy to read, easy to follow. We did not need to purchase any special tools to install the system,” continued Hamilton. “This project has the same material (slate) on an extremely pitched roof as it does on the façade’s rainscreen cladding system. As a result, the building presents a visual appearance of being very monochromatic.

“We would definitely recommend and not hesitate to work with again with the CUPACLAD® System, especially due to its ease of installation,” added Hamilton. “It is an ideal system for the New England weather, which can change within an hour!”

“When a façade needs to breathe, this system allows it to do just that. It accommodates building movement, while keeping both heat and cold off of the building. 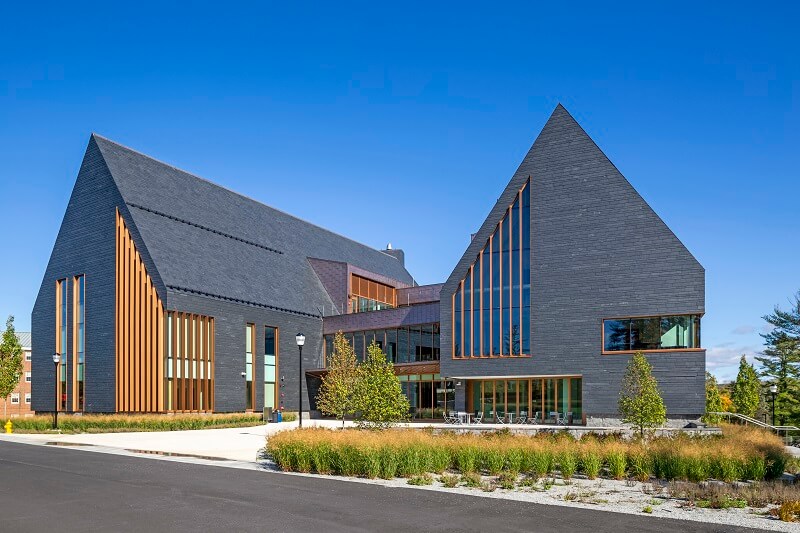 “My favorite part of this project was that we were able to work the slate into the interior of the building,” stated Peschard. “The look of this slate ‘coming into the building’ is very pleasing to the eye.”

The SNHU project called for weaved corners that truly added to the aesthetics of the building.

The CUPACLAD® 101 Random rainscreen cladding system was the answer, as it revolutionizes natural slate cladding installation by combining different slate sizes to generate a dynamic, visual creative composition. The coursing of the material was easily adjusted on site. This was important to allow the proper and intended coursing that the architect intended around the triangular windows.

CUPACLAD® 101 Random system includes invisible attachment elements that make its natural slate the sole, main attraction of any facade. Designers can now offer an original design that makes the most of the flexibility and natural durability of slate cladding. Consisting of 50×25, 50×20 and 50×15 cm slates installed horizontally with concealed screws, CUPACLAD® 101 systems use self-drilling stainless steel screws with large diameter flat heads, specially selected by the firm’s engineers to guarantee perfect attachment and reduce installation times, as well. Furthermore, the system enables contractors to install various shapes and sizes of slates with all attachment components concealed behind the slates in the row above, allowing for a 100% focus upon the natural slate.

“This system, wildly successful in Europe, was introduced to the United States and Canada in 2018,” declared Matt Berk, co-owner of EcoSupply Center, the specifier on this project.

“Due to its performance, ‘look’ and surprisingly affordable pricing, we have been very successful with CUPACLAD® Systems already!”

And, according to Patricia A. Lynott, president of SNHU’s university college,

“The new CETA building continues SNHU’s trend of innovative improvements to our higher education system. In all my years here, I think I am most excited about this building; what it represents and the possibilities it opens up for our students and faculty.”