At Vermont Slate Company, customer service & delivering quality products is of our utmost priority! Below is a question a recent potential client asked about the quality of our Spanish slate product, and our answer.

Question: I’ve seen problems with Spanish slate having pieces of iron in the face, which then rust out and create holes. Does your slate have this problem?

Answer: We are very aware of some of the issues with Spanish slate, mainly from the 1990’s, when Samaca first entered the US market with a very poor product. At that time were we importing CAMPO slate and there was a lot of bad press we had to fight to explain that there is a big difference in quality available in Spain. Samaca was importing inferior slate that could not be sold anywhere else in the world. It had unstable iron deposits that rusted out just like you say. We actually sold Spanish slate to replace a number of roofs in the late 90’s and first few years of the 2000. Since that time, a number of other producers from Spain have entered the market and this has forced Samaca to clean up their act a bit, but they periodically still sell slate with no ASTM testing from a quarry that I know is S-2 grade when they need to unload the cheapest material they have to undercut the others and get a job.

We import CUPA slate. In 2006 they bought the CAMPO Quarry#98 we were sourcing, so we started dealing with them. So we have been importing the same material from that quarry since 1993. Since that time I have had a few, maybe 3 or 4, complaints for breakage. Which is not surprising since every now and then we do get crates that have been mishandled and have some breakage. But that 3 to 4 number is surprisingly low for over 20 years of selling tens of thousands of squares of this same slate. In all that time, we have never had a complaint for unstable iron deposits, rusting, discoloration or any other issue. We issue a 75 year warranty for our Spanish slate and actually CUPA supplied us with a 100 yr warranty, so we do bump it up to 100 when a specification requires it. But our product liability insurance has a clause holding us to 75 yrs and that is the reason we use that number. 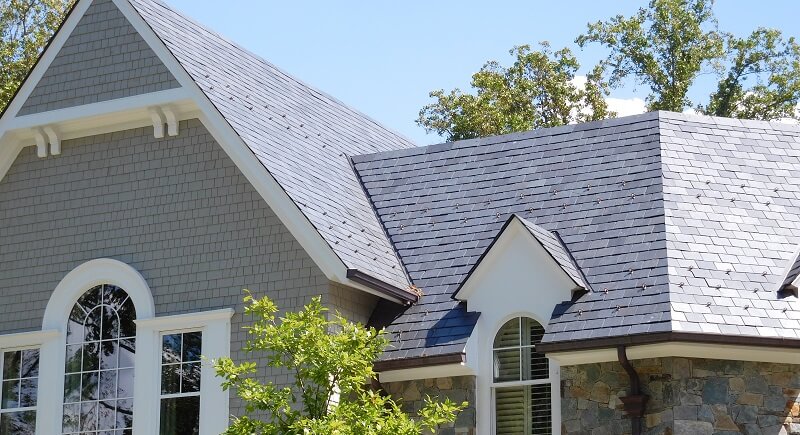 CUPA is the largest slate producer in the world by far. We import CUPA slate from 3 of their 16 active quarries and sell it under our Dover tradename. These quarries are Q98, Q14 and Q12 and all have consistently passed the ASTM S-1 Grade rating, which is the highest attainable rating. We are the largest importer of roofing slate in the US, accounting for about 65% of the total US imports of Spanish slate this year, so we have a lot to lose if we sell bad slate. So I can assure you that the slate we sell will not rust or fail, and if on the outside chance you did have a problem, we will stand behind what we sell 100%.

With natural stone, there is always a minute chance that an anomaly will occur. So for anyone to say that my slate will never show even a hint of a rust spot is not realistic. The best domestic slate in the US gets a spot or 2 occasionally: especially Vermont unfading green. But I can say with 100% accuracy that we have not had one single complaint to that effect on the Spanish slate we sell. And that we stand behind what we sell 100%.